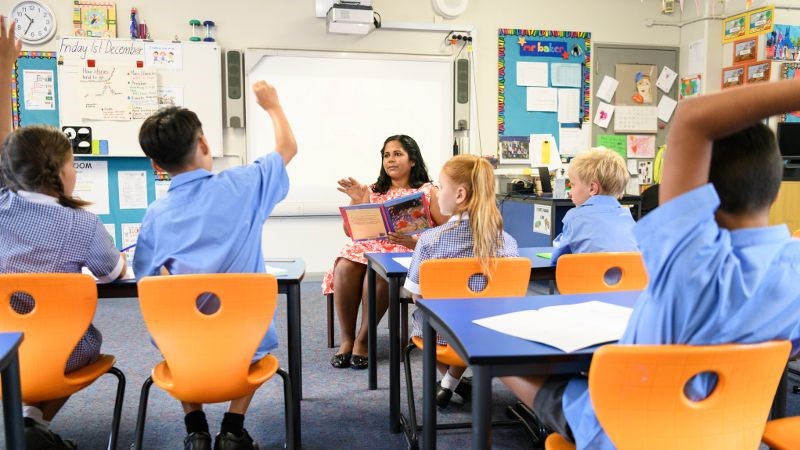 Many strategies and techniques (whether in this book or others) come with the simplistic assumption that they will either work or not work. However, when dealing with large groups of people, it’s never that black or white. Strategies often work or unfold in strange and unintended ways. For example, a chat with a student might unveil issues that you never knew existed. This in turn changes your understanding of the root causes of his or her behaviour and how you will manage that student from now on. A student might move from one seat to another after being relocated but not to the seat you instructed. Sometimes a strategy will only partly work, and teachers will need to think on their feet and reimagine their approach.

Hint: If a strategy fails but still influences a student’s behaviour in some way, then it still had an effect – just not the one you expected it to.

New strategies pose a bigger challenge because students are unfamiliar with their process. Some may need time to go through the predictable routine of testing and learning whether they can manipulate these strategies to their own ends. Each time a teacher uses the strategy, the student gradually forms the habit of complying. Each time the student complies, compliance the next time is a little easier – in theory at least. For some, this takes no time whatsoever; for others it can painstakingly slow. Teachers can also expect students to fall back into old habits now and then.

Teachers who support students with disabilities have long used the approach of gradual change – new strategies are never expected to work immediately. However, gradual improvements in behaviour is expected as is a reduction in the level of resistance to the strategy over time. Initially it may take the teacher 6 minutes to coax a student to move from his or her original seat to another assigned location in order to be less of a disruption. After a few incidents over a 2-4 week period, the teacher perfects their approach and at the same time the student forms new habits and expectations while learning that fighting the process never works. The new strategy becomes normalised and resistance drops from 6 minutes to 2 minutes or less for 75% of incidents, which is considered a success. The teacher can now provide the student with data and set behavioural goals and rewards. This confirms the student’s belief that the process and associated consequences for resistance will continue indefinitely and are not negotiable. This persistent and gradual change in habit, expectation, resistance and behaviour makes life much easier for both student and teacher, even on ‘bad days’.

Hint: This technique is so common that there are entire programs designed around the idea of gradual and incremental improvements. They often include collecting data (e.g. frequency of behaviour) which is tabulated and provided to the student (who may not even realise that a pattern exists or be cognisant of its extent).

Here is a common example from a special needs’ class. A student might be known for running away from class (‘doing a runner’ as it is called). This typically happens about once a day and means 2 staff members have to go with the student to make sure he or she is unharmed (run over by a car, for instance). Often the incident is preceded by a meltdown which is very stressful and distracting for both staff and students. While the end goal may be to eradicate the behaviour, gradual improvement over time is celebrated as a victory and seems to be a more realistic goal at this point. If staff implement a new strategy (or a series of strategies) and the behaviour reduces to once a week (from daily), the new strategies will be heralded as successful. Staff and the target student can then build on this success (positive prompting, rewards etc.) and new goals can be set. Over time, incidents gradually reduce from once a week to once every 2-3 weeks. The habit has been broken and reoffending is low (albeit very possible now and then). 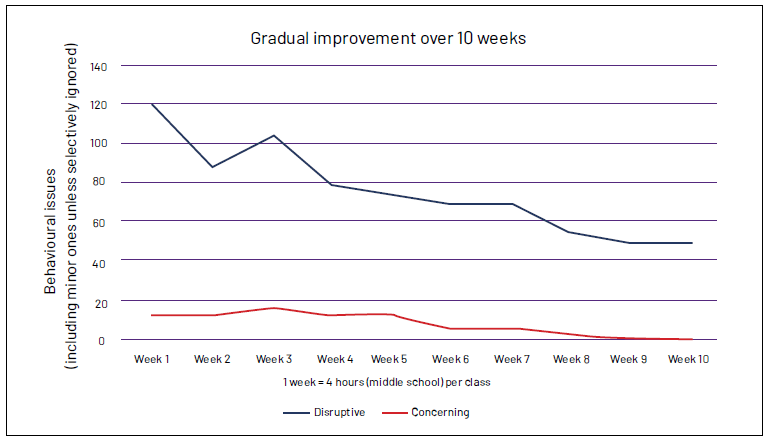 Figure: Gradual improvement over time for both types of behaviour for an ‘average’ teacher in a general class. What do you think could have caused the spike in week 3?

Imagine you are dealing with a new class of 32 teenagers who are loud, boisterous and energetic. These students don’t see the point in your particular subject and are happy to tell you as much. You cannot expect miracles, but gradual change is achievable. You realise it may take a month or so to get your students to the point where your class is no longer considered ‘challenging’. Employing a series of strategies, testing and tweaking them, takes time. Routines and processes take a few weeks to normalise and for students to form new habits. You are not particularly stressed or anxious about the multitude of current problems as there are signs of gradual improvement. You know that the behaviour is not caused by poor instructional design or other self-made reasons. After 3-4 weeks and some final tweaking, the last hot-spots are mopped up quite easily. Once you narrow down the number and type of behavioural issues to a manageable level, you can apply laser-like focus on 2 or 3 issues to eradicate them entirely.

Employing a series of strategies, testing and tweaking them, takes time.

Hint: Don’t be afraid to tell students that they are improving even after a meltdown or other serious issue (such as refusing to move). This may be difficult if you are often angry and annoyed at the student. Positive prompting is in your best interests as it encourages future desirable behaviours. Even when a student is overwhelmingly defiant and difficult, he or she will have done something correct such as having arrived on time or sat quietly. You may say, ‘we are getting better at that process and you listened to my instructions at the end – we’ll give it another go next time, but I am very happy with how it went overall compared to last week – what do you think?’