The snowball effect is similar to the ripple effect. However, unlike the ripple effect which dissipates over distance and time, the snowball grows exponentially and gains pace. When this happens, the teacher needs to act fast to prevent bigger issues – it is somewhat of an emergency. The snowball effect is where an action of either the teacher or the student influences the behaviour of nearby students, who subsequently influence the students around them. Like a spreading virus, each student ‘infects’ those around them. They may even re-infect those nearby who were recently ‘cured’. In other words, the problem grows with passing time – it spreads like a zombie apocalypse moving through a crowded city. Unlike the ripple effect, which can be either positive or negative, the snowball effect is really only thought of as negative.

This snowball effect can be seen when teachers allow 1 or 2 students the freedom to ‘have a quiet chat’ and soon that little conversation turns into half the class behaving like zoo animals. Students begin to get out of their seat and move around. Others decide to yell to each other across the room. Suddenly a pen is thrown across the room, then one in response, then another and another. The innocent whisper between 2 students turns into a circus of epic proportions in less than 15 minutes. The teacher demands silence but unfortunately, it’s too late. A battle has begun. The class is energised and excited – the lesson is way off track by now and most have given up the task at hand – it was clearly a ‘time-waster’ anyway. Those on-task can barely concentrate because of the noise. The teacher demands several students get back to work but is met with a predictable reply, ‘but you let them talk over there, they have been talking for 15 minutes’ – an annoyingly accurate statement. The teacher is confused and embarrassed – wondering what the teacher next door is thinking. How did this happen?

Figure: Despite the teacher’s best efforts, combined noise grows exponentially. This leads to other issues: A = multiple relocations. B = bullying incident requiring support. C = 2 students go missing. D = meltdown and multiple incidents simultaneously. X marks where the teacher should have acted to prevent the snowball effect. Students usually give teachers a chance to adjust and take control early on, but in this case the teacher ‘missed the boat’. The teacher’s ‘set and circulate model’ fails to engage the class and exacerbates the issue. 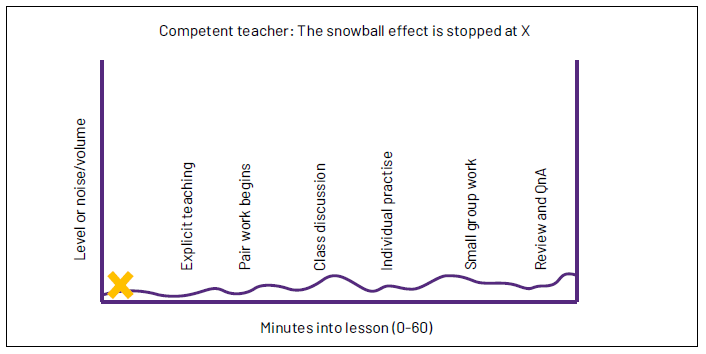 Figure: The teacher has strict behavioural expectations and enforces them from the minute students enter the room. Short-sharp activities mean students have no time for chatting with friends.

Let’s look at another rather comical but all-too-common example. A student might decide to pack up 6-7 minutes early. They are probably just hungry and there is no sinister plan afoot. The inexperienced teacher notices, makes eye contact, thinks for a second or 2 and then decides not to bother – it’s late Friday anyway. Unbeknown to the poor teacher, 5 students did actually notice and they were waiting to see what the teacher would do – it was something of an experiment. Soon those 5 more students pack up, followed by most of the class. The teacher now has 4 minutes to go and students are starting to run amok – they have nothing to do and are all very excited. The teacher is incredibly stressed and starts counting the seconds while hoping nothing goes wrong. He or she wonders, ‘what just happened – they were working so well but now I’ve lost control and it’s a nightmare?’ The teacher next door is not happy – her perfectly quiet class is distracted by all the noise. In despair the teacher releases the class a couple of minutes early and students scream out the door. Afterwards, there is mess everywhere – luckily, nothing is broken – at least this time.

Being the savvy, full-time professional students that children are, the following Monday’s lesson ends with a dozen students ‘packing up shop’ some 8 or 9 minutes early. Students remember that Friday was a blast because this teacher lets them pack up whenever they want. They are told to unpack but by then a few more have their bags on the desk ready to leave. Students argue and a few more minutes go by. Others notice and pack up thinking they must have the wrong time, or the teacher has allowed it. Students begrudgingly unpack and sit back down. Some are confused as to why the teacher is inconsistent with this routine. They are not happy with the teacher who (in their minds at least) is sending out conflicting messages – one day they can pack up early, the next they can’t – it makes no sense. Students also rationalise that they worked pretty hard all day so why not pack up early. The poor teacher now has a problem thanks to the snowball effect.

This is why experienced teachers keep students engaged right up until the last second, only packing up 30 seconds or so early. Some teachers even have students working until the final bell. Only then are they allowed to pack up and only once instructed to do so. These teachers often only let students go one at a time after checking that their area is neat and rubbish-free – sometimes only after briefly checking their work for the lesson. In other words, the bell or siren signals the end of learning time and not the exact time that students are permitted to leave.