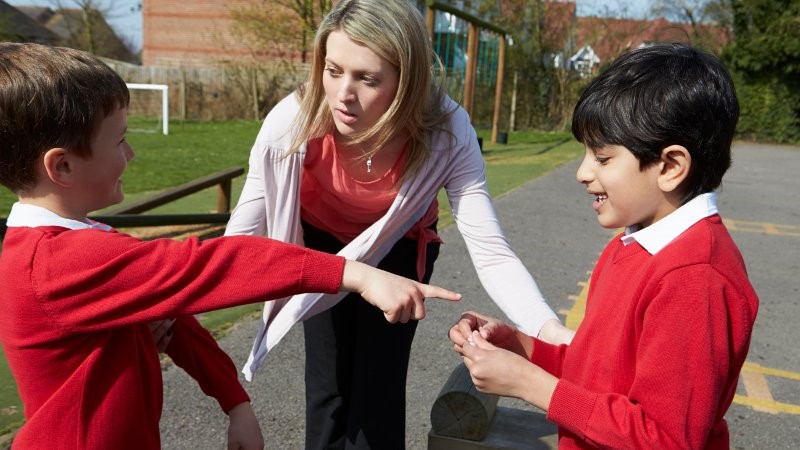 Novice teachers may struggle to think of behaviour management in terms of addressing the underlying or root cause, particularly when first placed under the intense workload of managing a class. An easier, simpler and more user-friendly approach (initially) is to categorise behavioural issues into 1 of 2 categories: disruptive behaviours or behaviours of concern.

Almost all behaviours that teachers deal with on a daily basis are simple but annoying disruptive behaviours. Some teachers will rarely see behaviours of concern – others will deal with it daily. Categorising behaviour in this way helps inexperienced teachers in particular because it provides a simple way to conceptualise and frame the very complex task of behaviour management. Matching a behaviour to a category allows the teacher to determine a best-fit response more easily.

Matching a behaviour to a category allows the teacher to determine a best-fit response more easily.

Behaviours of concern in one class might be no more than a normal day at the office for another class. In a school for students with special needs, these types of behaviours are common (e.g. spitting, running away, etc.). While still concerning and requiring attention, there is a big difference between a neuro-typical student spitting at a teacher compared to a child with a severe intellectual impairment and global developmental delay doing it. In this example, the intent and thought processes of each child would almost certainly have been very different – in other words, 2 identical incidents but 2 very different root causes.

Because of this, the behaviour will be treated differently. It is not uncommon for children with special needs to spit at staff due to frustration and an inability to recognise, process and articulate their anxiety or other negative feelings. In this case, staff will have a plan in place to reduce the frequency of this learned behaviour (such as by removing triggers, using cards to communicate feelings, and implementing a reward system). The same behaviour from a child who does not have a disability or disorder on the other hand is very concerning indeed.

You have learnt so far that behaviour is a form of communication. In fact, there is a term for this – it is called ‘the communicative function of behaviour’. In other words, the purpose of some problematic behaviours is to send a message – to tell you something that the student is incapable of articulating or simply doesn’t have the emotional skills (emotional intelligence) to recognise, process and put into words using their limited vocabulary. For example, a student who is frustrated or who feels that they have no chance of success may ‘act out’ – the resulting behaviour tells their teacher that ‘this is too hard for me’.

It is important to remember how difficult it can be to learn something new and how easily it can cause frustration (even for adults). How do you feel when you can’t put a new piece of furniture together and ‘the instructions are wrong’? Students feel these same emotions when learning something new except we expect them to be ‘engaged’ and to enjoy the learning process! We also expect them to do it calmly and to do it all day long, every day. The point is to not overlook how frustrating it is when we can’t figure something out. Adults procrastinate all the time; when children procrastinate however, we call it ‘undesirable behaviour’.

Consider a student who has never been in trouble before that suddenly starts screaming at a friend and then runs out of class. This behaviour would normally be classified as a behaviour of concern. However, it is more than likely going to be a one-off, forgivable event. It certainly needs addressing in some way (so other students don’t think the behaviour is acceptable and to ensure the student is okay), but it’s not overly concerning for the teacher given that there was no malicious intent or direct defiance. What happened that made this student act in such an unexpected manner?

The teacher runs through the list of potential root causes – mental health, bullying or something happening at home seem likely. Teenagers that act out may be the subject of bullying and harassment, they might have started taking drugs or even be depressed or suicidal – a teenager contemplating suicide cares nothing for your maths lesson and a different approach is needed if this is the suspected root cause.

The purpose of some problematic behaviours is to send a message – to tell you something that the student is incapable of articulating or simply doesn’t have the emotional skills (emotional intelligence) to recognise, process and put into words using their limited vocabulary. 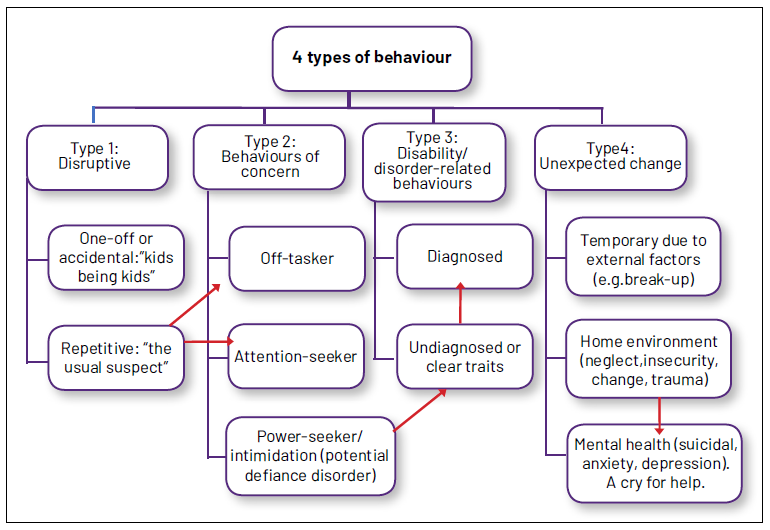 Figure: The 4 categories of behaviour and arrows showing how a behaviour may evolve over time.