The self-fulfilling prophecy: applications for the classroom

Self-fulfilling prophecy – refers to the way humans change their behaviour to meet the expectations of others.

Also known as the Pygmalion effect, the self-fulfilling prophecy refers to how easily a person is influenced by the expectations of others – even if that expectation is based on a false belief. The effect can be negative or positive. Students who are expected to achieve a high score often work harder to meet those expectations regardless of whether they are middle or high achievers. Teachers also often place low expectations on students with behavioural issues. Subsequently, they are often less motivated, they are off task more often and they receive lower scores. The self-fulfilling prophecy can take seconds or even years to take effect. Here is an example:

Here are some common beliefs that begin the self-fulfilling prophecy circle of effects:

Teachers often place low expectations on students with behavioural issues. Subsequently, they are often less motivated, they are off task more often and they receive lower scores.

Setting high academic expectations for all students is known to be one of the most effective strategies in improving students’ performance.i This applies to all students regardless of their previous achievements – raising the bar even for high-flyers can help them to reach new heights previously thought unimaginable. Low-achieving students also benefit from high expectations provided they are reasonable and achievable. Teachers can set high expectations in a number of ways, such as setting SMART goals, repeatedly telling students that they can achieve, and not assuming that attributes out of their control precludes a person from academic achievement (attributes include race, culture, ethnicity, family background, socio-economic status, gender, behaviour, current level of skill, language, disabilities and disorders).

Low-achieving students benefit from high expectations provided they are reasonable and achievable. 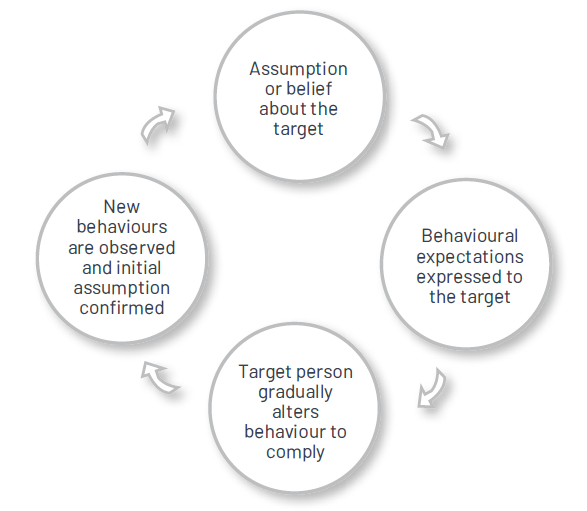 The self-fulfilling prophecy takes time but can have either negative or positive consequences.

The self-fulfilling prophecy phenomenon can have significant long-term effects. For example, a teacher believes that Johnny is good at computers because she sees him on the computer every day (even though he is just playing games). She believes that mostly males become IT technicians which is reinforced by the fact that all 3 technicians at the school are male. Over a period of 6 months, the teacher repeatedly tells Johnny that he “is” good at computers (also due to the fact that the teacher is not tech savvy so she can’t accurately assess Johnny’s actual skill level). The teacher does this by asking Johnny to help other students when they have IT issues. Johnny has no idea how to fix the problems, but he is happy to help as he gets out of doing schoolwork for a few minutes. Johnny proceeds to type each problem into Google to find the solution. It does not take long for Johnny to believe that he actually is good at computers, much to his own surprise (and the teacher keeps saying it, so 'maybe' it's true).

Johnny starts to think that ‘IT is his thing’ and begins learning more in his spare time. The following year Johnny enrols in a computer course as an elective. The teacher sees Johnny in the computer class which confirms her belief that Johnny is good at computers. This experience also teaches the teacher that she is really good at ‘reading’ students and ‘predicting’ what they will do when they grow up. Johnny eventually becomes a network technician for his entire career in spite of the fact that he originally had no interest or skills in IT whatsoever. Johnny now tells people that ‘it’s just something he was always good at in school’.

Hint: confirmation bias is when a person looks for information that confirms their beliefs while ignoring anything that contradicts their belief. For example, a person searches online for the benefits of drinking green tea but does not search for or read anything about the negatives of drinking the green tea. When teachers and students confirm their initial beliefs, they may simultaneously ignore contradictory evidence. In the example above, the teacher ignored or dismissed the fact that Johnny was just playing mindless games as that didn’t confirm her belief – she chose to concentrate on the fact that Johnny was sitting at a computer – a fact that confirmed her belief.