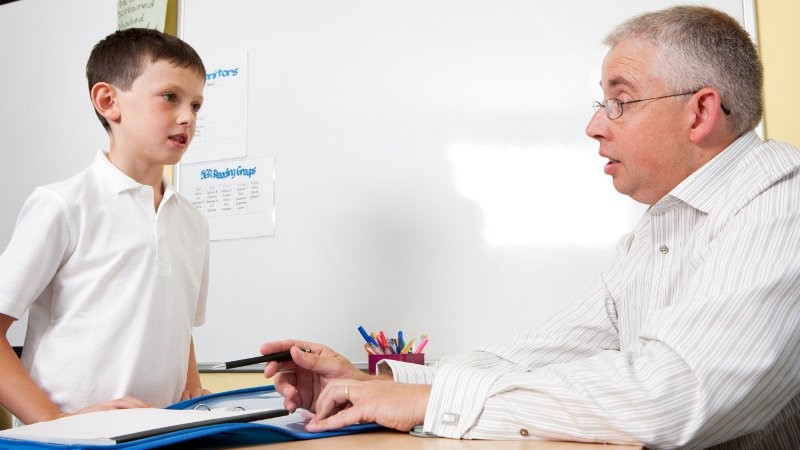 Police, military and other security forces around the world have long adopted the concept of minimum necessary force. The British employed it during colonial times to maintain control over vast portions of the globe, often with practically no military presence whatsoever (French, 2019). From around 1858 until independence, fewer than 20,000 British troops and officials oversaw British interests in India – a colony of 300 million people. That’s a staggering ratio of 1:15,000!

How is this relevant to the classroom? Teaching is often stressful and tiring. The number of people who leave the profession due to stress has always been disproportionally high. Speak to anyone who has left for greener pastures and they will cite behavioural issues almost instantly. Imagine if there was a way that we could apply the least amount of effort in order to achieve our behaviour management goals. This approach would mean the least amount of stress as well (and presumably fewer teachers leaving for other industries). By implementing the concept of minimum necessary force, a ratio of 1:15,000 was all that the British needed to successfully manage an entire country. How could this same concept be used to assist us in managing a class with a ratio of 1:30?

The steps above are tedious and in reality, teachers do all 5 in less than a few seconds. You will not have time to gradually run through all 5 steps when managing 25 students late on a Friday afternoon. Almost all behavioural issues fall into 1 of 3-5 categories (talking-out-of-turn, disrupting others and wandering around the room represents the bulk of low-level issues). Because these behaviours are so common, it is relatively easy to plan how you will apply the 5-step process while allowing for variations and professional judgement. For most behaviours, step 5 is not required. Consequences are only applied to higher-level behaviours or multiple low-level behaviours. The consequence of a low-level behaviour is the low-key response itself (negative teacher attention and reprimand).

Hint: The repeated use of harsh reprimands has a negative effect on teachers’ mental wellbeing. Instead of decreasing undesirable behaviours, these reprimands actually increase them over the medium-long term as more students become disengaged with the learning process (Reinke et al., 2013).

To analyse the 5-step process in more detail, let’s assume a student (Anna) has playfully punched Chad rather hard in the arm. The teacher determines that this action scored 5 out of 10 on the behaviour scale (noting that your scale may be very different depending on your cohort, expectations and school). Now, having decided that the behaviour warrants further attention (unlike a score of 1 or 2), the teacher determines what he or she wants to achieve. In this case, Anna needs to be made aware that the behaviour is inappropriate and that it should not be repeated. However, given the friendly nature of the exchange and the fact that both students continued working after a quick head shake from the teacher, the follow-up response can wait. It is mentally filed to be actioned sometime later that lesson.

In the example above, the teacher used the minimum necessary force to achieve the desired outcome (both students on task). The teacher’s response may seem simple and obvious in retrospect, however there are many experienced and inexperienced teachers who would interrupt the lesson to spend several minutes pointlessly dealing with this ‘issue’. If the primary desired outcome is for students to return to work, the teacher achieved that very easily with a simple head nod. A second action, the follow-up chat, occurred when the teacher went to Anna’s desk later that lesson. This chat reinforced the teacher’s expectations and Anna now knows that her behaviour was unacceptable. She is also aware that a repeat offence would be met with more serious consequences. Using this approach, the teacher did not interrupt or delay the learning of any other student. The consequence was a chat with the teacher which Anna found to be rather unpleasant.

Hint: All strategies and techniques in this book and elsewhere are merely guides designed to help teachers navigate the complexities of behaviour management. There are plenty of justifiable reasons to not implement a strategy or to even do the complete opposite. For example, just because it only took a head shake to get Anna back to work does not mean the teacher is limited to that particular response. The teacher may have chosen another action such as to have Anna sit outside for a short period. This may serve to prevent further silliness, even though it’s probably a disproportionate response. Maybe the teacher noticed Anna’s energy slowly increasing and the punch was the final straw.

An easier way to explain the general principle of minimum necessary force is to consider a ‘non-example’. Aarav is having a bad day. He is otherwise well-behaved and a good student. On this particular day however, Aarav decides to get up out of his seat to walk to the bin. Unbeknown to Aarav, who has been daydreaming due to lack of sleep and hay fever, his teacher just instructed the class to stay seated moments earlier. The teacher, also having a bad day and suffering from hay fever, proceeds to rather aggressively admonish Aarav who is shocked, scared and now very confused. Don’t be surprised if you see teachers behaving in this way – unfortunately, it does and always will happen.

Aarav’s actions were probably a 2 or 3 out of 10 given it was accidental and out of character – he did not get out of his seat due to defiance or malintent. However, his teacher’s reaction was a disproportionate 7 out of 10. Not only was this response completely unnecessary, but it further inflamed the teacher’s level of stress. Other students were distracted from their learning and the mood of the class suddenly changed from friendly to tense. Students were now keenly aware of the teacher’s unpredictability and worried that they too could suffer the brunt of the teacher’s irrational outbursts. Due to this, participation in whole-of-class activities diminished for the rest of the day as students sought to avoid the teacher’s attention.

What should the teacher have done in this example? For starters, the reaction should have been much less aggressive and emotionally charged. Consideration of the root cause might have helped to determine the probability that the behaviour was deliberate. The teacher could have repeated the instructions, communicated his or her frustration and moved on. A deep breath might have helped. The teacher might repair the damage by apologising and explaining to the class that they too were not having the best day.

The scale below is a guide only and should be adopted to your cohort and expectations. You do not need to accurately diagnose a behaviour as being at a specific level – the point is to show how a behaviour at a given level is matched with minimal and proportionate force. 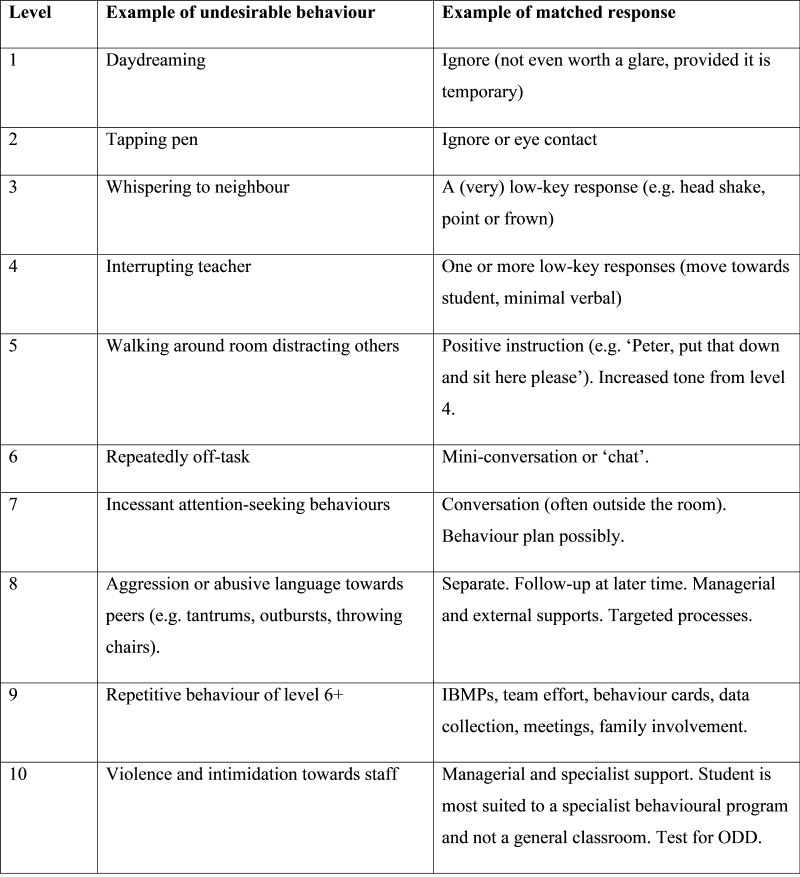 Fields, B. A. (2014). A review of school behaviour management plans: blueprints for the management and support of students exhibiting problem behaviours. Special Education Perspectives, 23(1), 42-56.